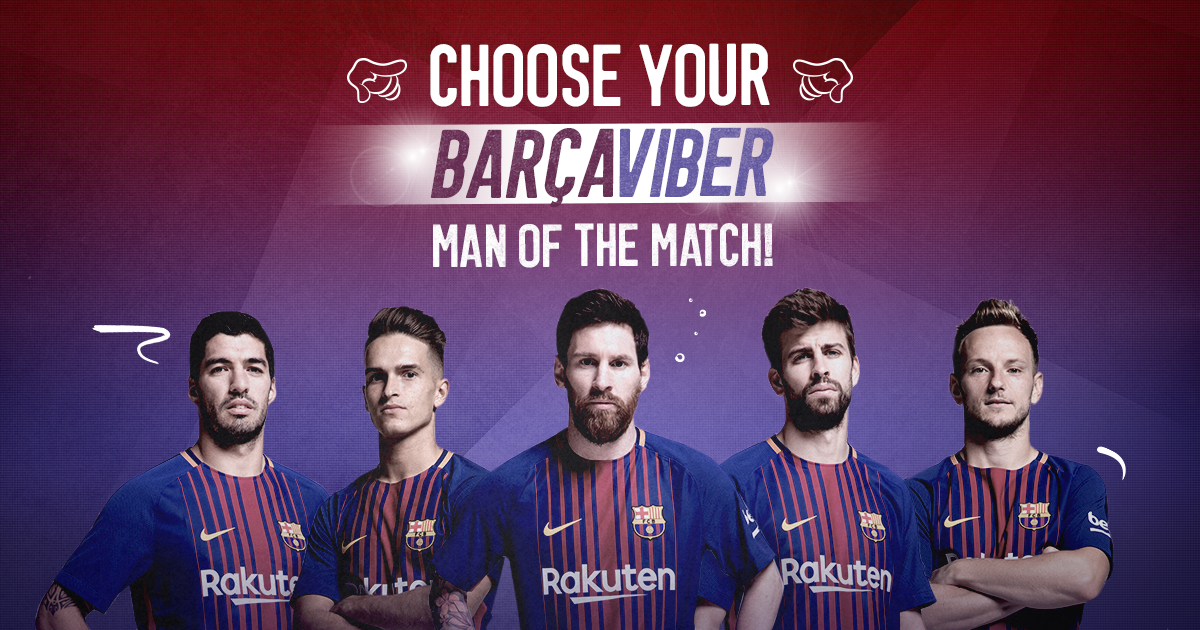 When we first announced that Rakuten is the Global Innovation and Entertainment Partner of FC Barcelona, we were thrilled because it meant that Viber would be the team’s official communication channel. We couldn’t have imagined back then just how exciting the partnership would become. Just a few weeks after the team grew its Viber Public Chat to over 4.5 million followers and released its official sticker pack, Barça fans are now able to vote for the best player in every match of the season with “BarçaViber Man of the Match.”

As a part of Barça’s official chatbot, developed in cooperation with Inscouts, Opta and Chat Leap, voting users will help decide who will be the player with the most Man of the Match awards throughout the season. That player will then be named the official “BarçaViber Player of the Year.” The chatbot will enable users to rate their excitement levels before the game begins, predict game results, and vote for their choice of the best player as well as rate the team’s performance throughout the game.

Don’t take voting lightly! The fans with the most accurate predictions across all the different predictions requested by the chatbot, including final match results and scores, Man of the Match and team performance ratings, will compete for the chance to be named the “BarçaViber Fan of the Year.” A title that will be accompanied by a variety of incredible prizes.

The Man of the Match competition will relate to all FC Barcelona games including La Liga, UCL and Copa Del Rey. Users will be able to vote for their favorite player according to the following stages:

Fan of the Year – Match Heat

During each FC Barcelona match, Viber’s FC Barcelona chatbot will ask users to fill out their predictions for the following questions:

The chatbot will collect users’ scores, so that if they score 4/4 hits, meaning they’ve predicted the final score of the match accurately, the community’s rating for the team’s performance and the community’s choice for Man of the Match, they’ll be named Match Bachelors.

The title will grant them one point for that specific match. One Match Bachelor will also win the Match Prize, which will include Viber Out credit for international calls worth $10, and a physical sticker pack that will be sent to their home.

Fan of the Year – Monthly Heat

At the end of each month, Match Bachelors that collected the most points for that month will be considered Monthly Bachelors and will be eligible to enter the Seasonal Heat.

A single participant who is an eligible Monthly Bachelor will win the Monthly Prize, which will either be an official Barça merchandise item or a travel package to get to see the team play at Camp Nou.

Win a chance to meet the @FCBarcelona all-stars when you vote for your pick for #BarçaViber Man of the Match on @Viber!- Click to Tweet

Fan of the Year – Seasonal Heat

There isn’t anything quite like winning the ultimate prize, is there?

One lucky Monthly Bachelor who will create a 60-second video in which they explain why they should be named “BarçaViber Fan of the Year” will win the ultimate Seasonal Prize!

A Viber committee will choose the best video and the winner who will get an all-inclusive VIP experience, which will include two flight tickets, two VIP tickets to a game, accommodation for three nights for two people, and $2,000 spending money. If that isn’t enough, the winner will get a once in a lifetime chance to meet the team players and present one of them with the award for “BarçaViber Player of the Year”!

So, what are you waiting for? Check out the official FC Barcelona chatbot for a chance to meet Messi, Suárez, Piqué, Iniesta, Rakitić, and the rest of the all-star team!